Better known for its late nights than its early starts, Dubai has a few more adventurous ways for you to take in its sights this season, specifically off-shore. So have yourself an early night, set your alarm, and get ready for sore muscles.

Read also: 5 Ways to Stick to Your Fitness Regime While Travelling 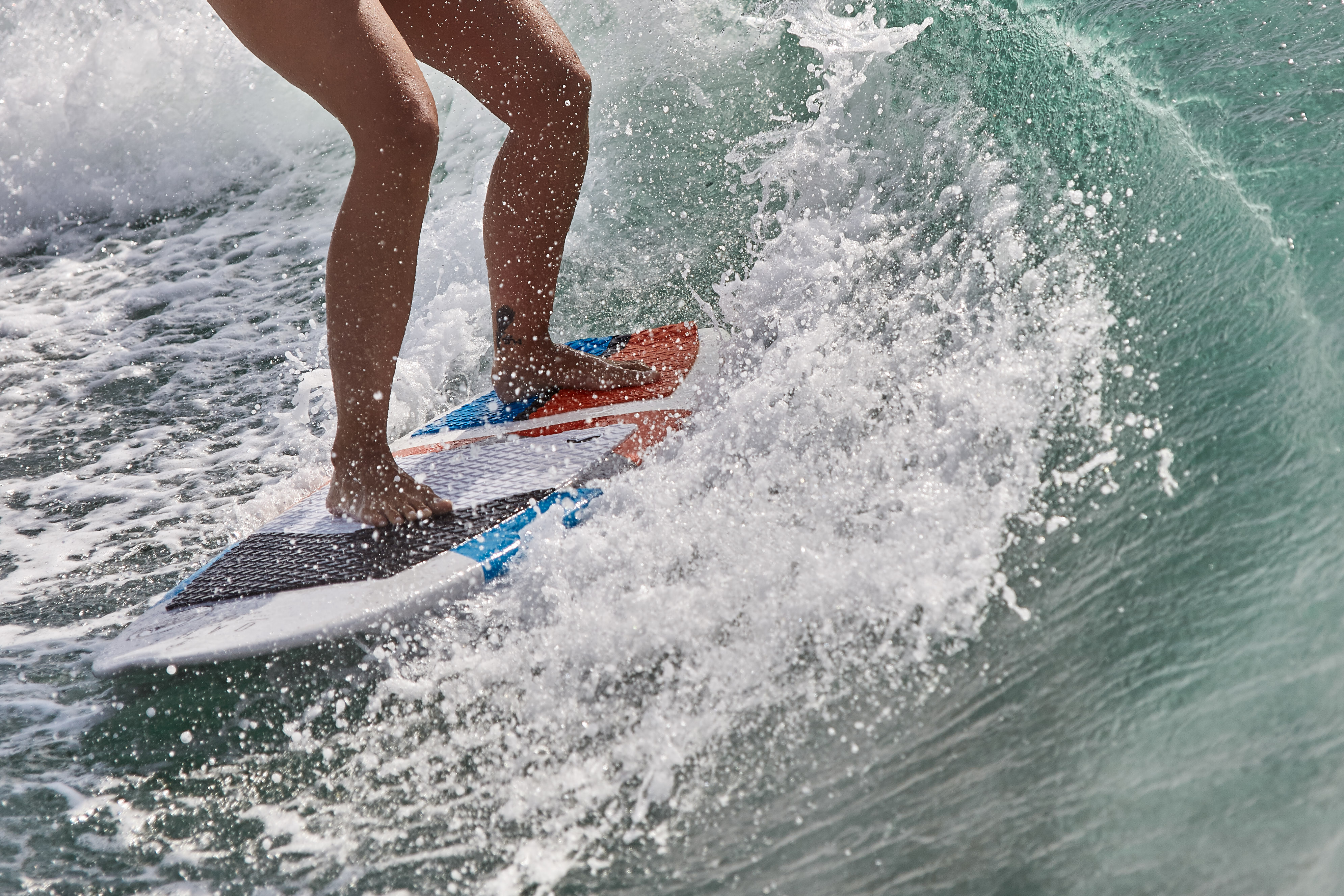 Wake surfing is Dubai’s latest water-sport to get passionate about. It’s a mixture of balance, confidence and coordination, but paired with a beautiful sunset and Dubai’s much cooler weather moving forwards as well as the skyline as your backdrop, it’s a great way to see the cityscape. Wake surfing is essentially a mini-surfboard (like a skim board) that you ride on the wake of a boat, only using the rope to pull you up into standing position, very close to the back of the boat itself, from there you let go once you’ve got the ‘sweet spot’.

Not to be confused with wakeboarding–where your feet are strapped into a board and are pulled behind a boat on a rope–wake surfing is a lot less dangerous. The boat goes a lot slower for one thing and your feet aren’t strapped to a board so when you do fall in, you can land as naturally as possible.

Each hour will cost roughly between AED 400-550 depending on where you go and what day of the week it is. One hour is great for two people, but with a group of three or four people all wanting a go, plan for two hours! 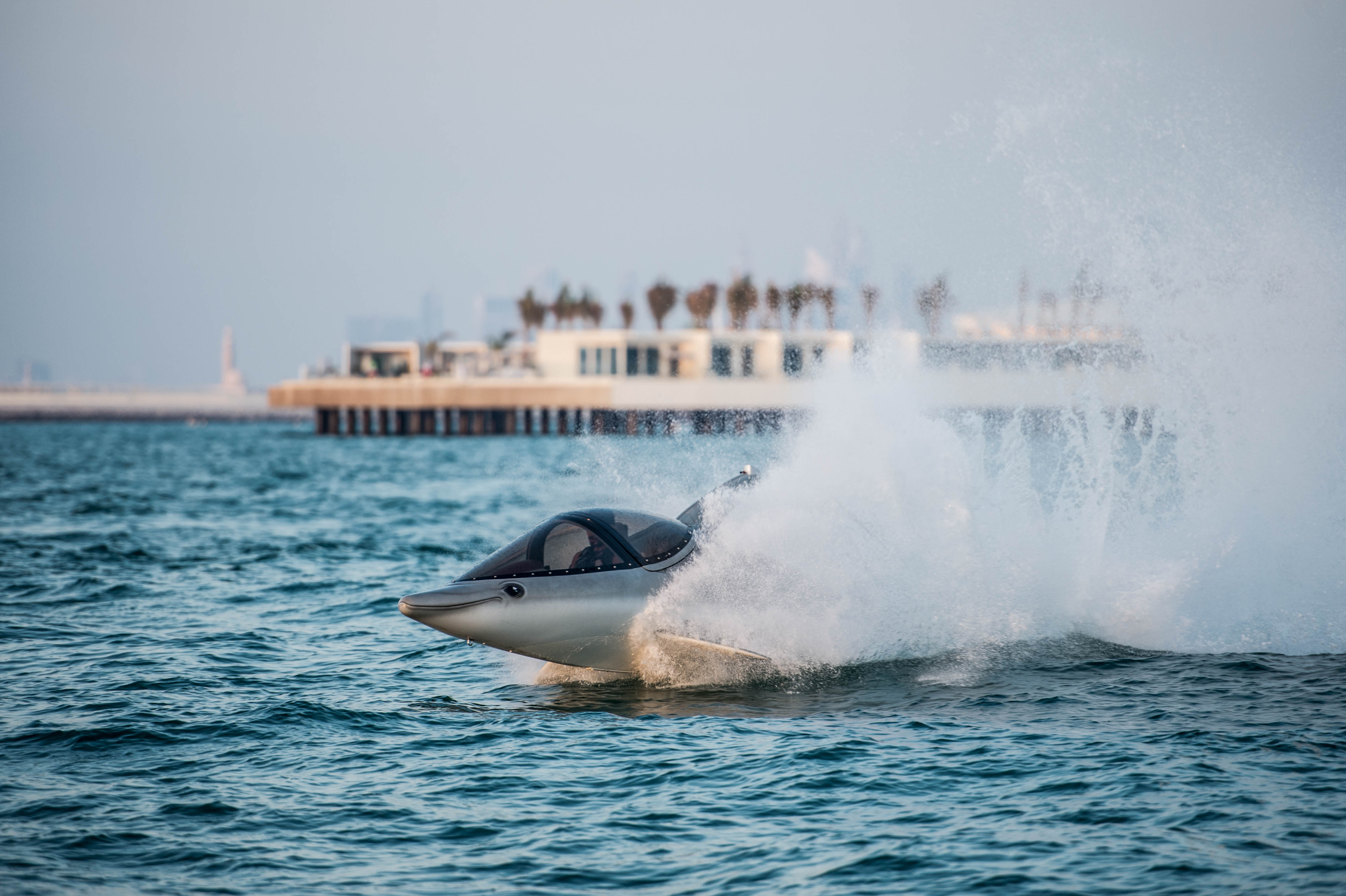 This shark-like submarine is without a doubt, the craziest looking offering Dubai has. It consists of a two-man cabin that allows you to literally jump the waves and submerge yourself below them too. With a 300hp supercharged engine, you can literally jump 90* out of the water and up to 2m under it. Don’t worry, you won’t need a license to ride it either as you’ll be driven around by a qualified instructor (phew). 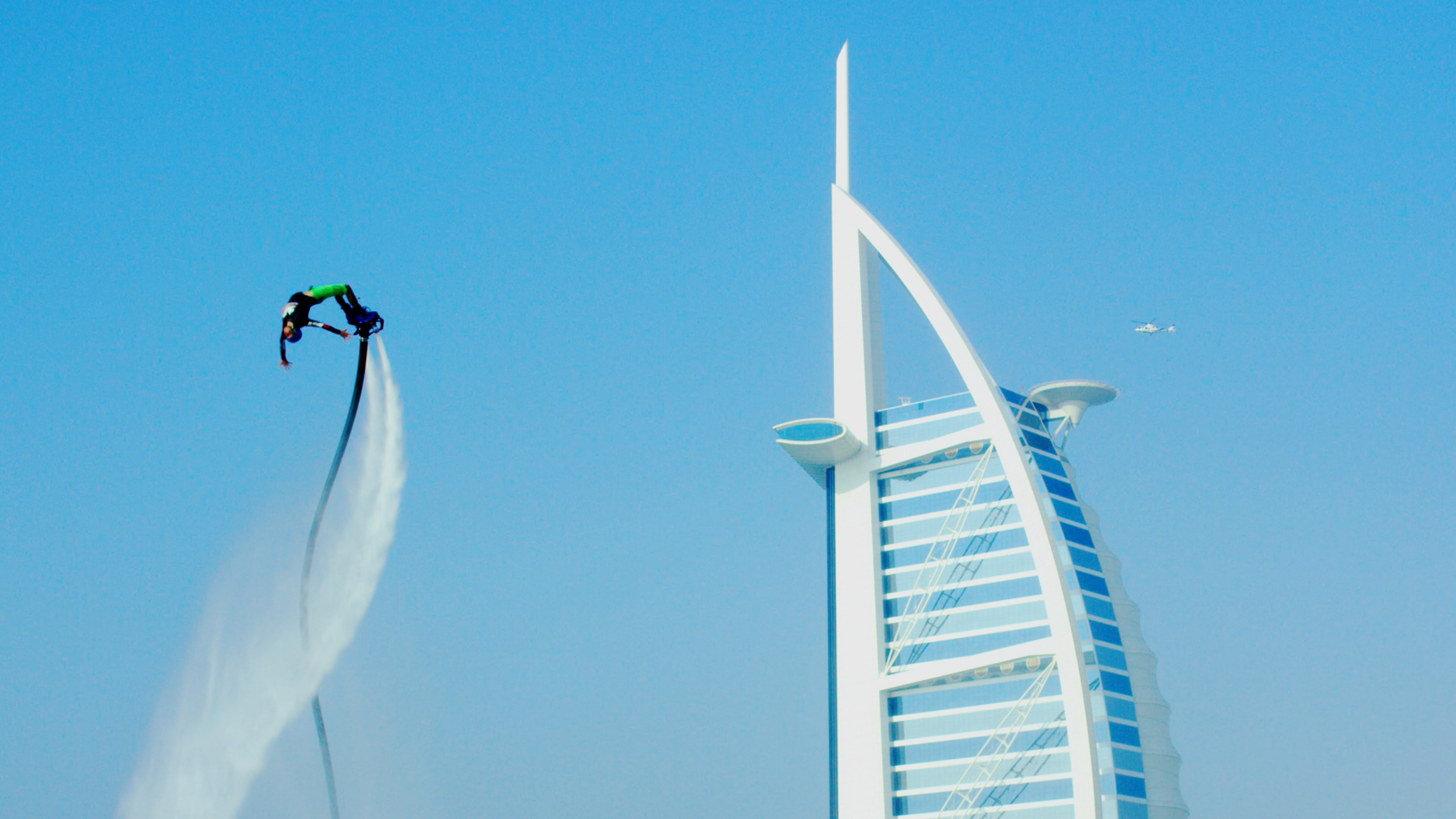 A Flyboard is a bolt-on device connected to a jet ski, which supplies enough water propulsion to drive you and the Flyboard into the air and out of the water. Rider’s stand on a board that’s connected by a long hose as water is forced up and under pressure to the jet nozzles underneath the board. It can thrust you upwards of 10m+ (49 ft) in the air and you can even dive headlong into the water like a dolphin.

What’s the trick to staying stable? It’s all down to focusing your mind on where you’re looking, for example, look down at your feet or the water and your whole body moves that way. The key is to stare just above the horizon and curl your feet underneath you slightly so that when the driver on the Jet Ski gives you some power, your feet naturally move underneath you into a straight-legged standing position, from which you then rise above the surface of the water.

Once you’re up, it’s totally different… if you so much as curl your toes, you’ll move. So relax but be firm and lock your knees as much as possible. With the iconic Burj Khalifa on the skyline, it’s a view of the city from a whole different height. 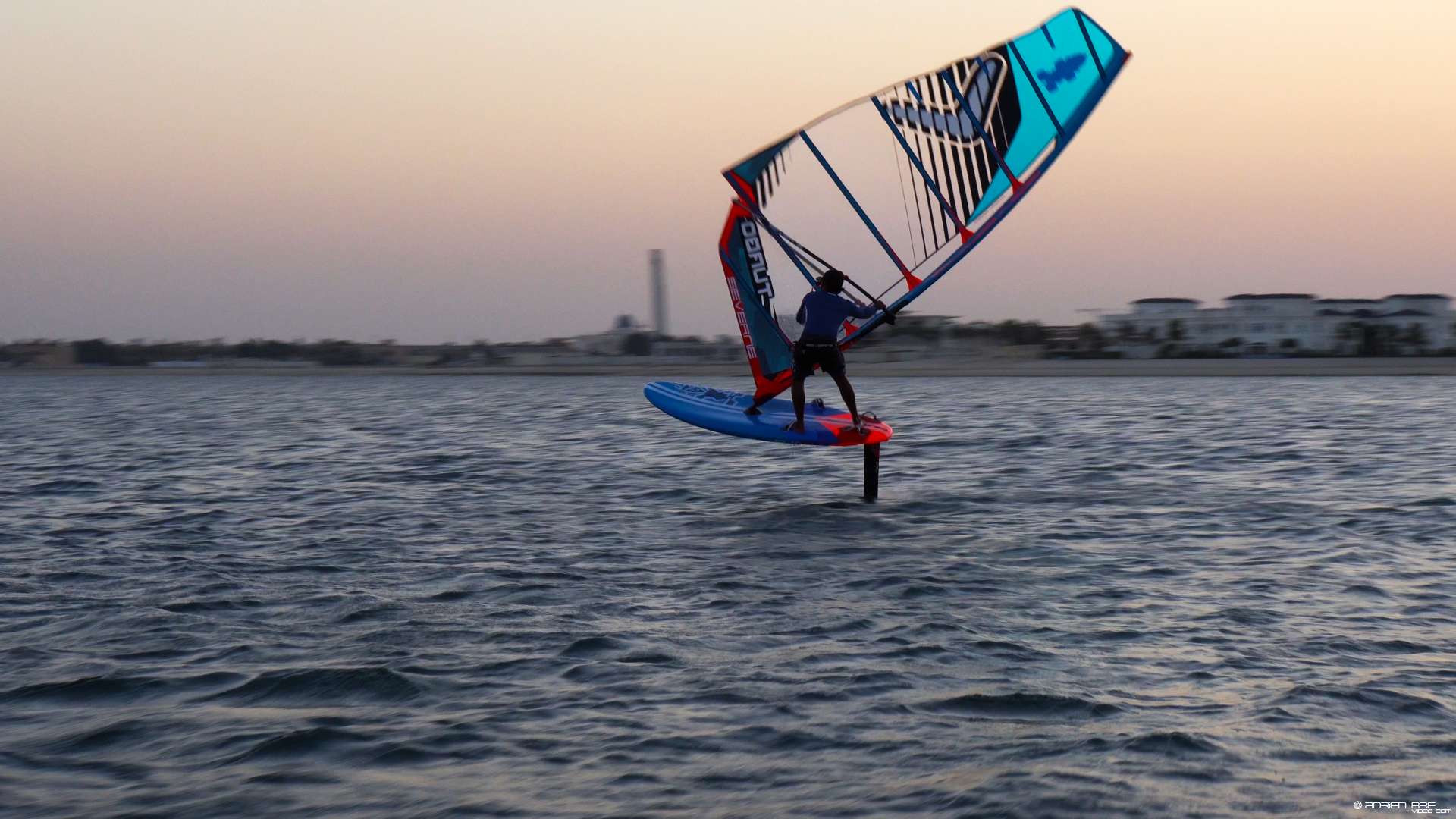 If you’re already familiar with windsurfing of the normal variety, why not give its big brother a go… this hydrofoil board props you and your board meters above the surface of the water, giving you less resistance and ultimately a much faster and somewhat easier experience. The Palm Jumeirah’s relatively crystal clear smooth water averages a daily wind forecast of 8-12 knots, making it the premier windfoiling spot in the Middle East. 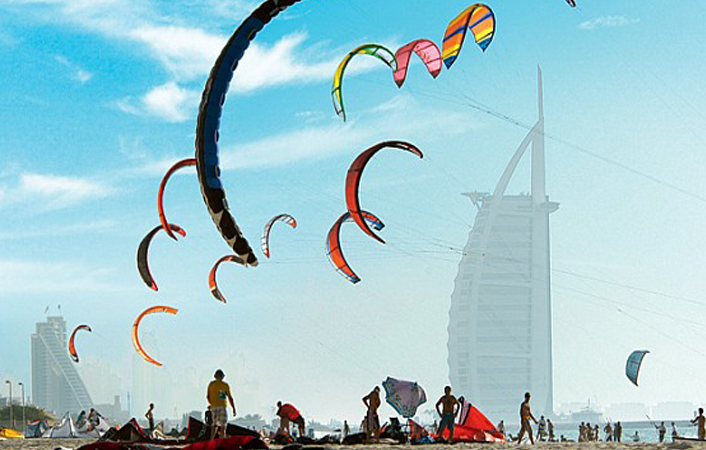 It’s only been popularised in the last 20 years and hailing from Hawaii, kite surfing’s a fun and extremely physical new watersports craze that’s hit the city.  A curious mix of wakeboarding, snowboarding, surfing, windsurfing, skateboarding, and gymnastics all rolled into one.

As a kiteboarder, you’ll harness the power of the wind with a large, but controllable kite, that will propel you across the water on a kiteboard, similar to a wake surfboard, without any bindings or straps usually. Surfing across the waves is the goal, and with the wind in your kite, you’ll be lifted upwards across the water too.

Dubai is a great place to learn and enjoy this sport whether you’re a beginner or better, because of its consistent, steady side-onshore winds. There’s plenty of spots across the U.A.E. to let loose, but Dubai’s very own Kite Surf Beach is aptly named because of its crowds of kite’s populating the horizon.

Work out around the world. 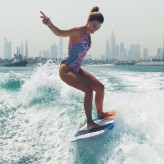 Amanda Rushforth is a travel and wellness blogger living in Dubai. Originally from the U.K. but with over 10 years in Dubai and a further 10+ in the Middle East as a whole, Amanda has always had a passion for travel and adventure.

5 Tricks to Travelling with a Toddler in Business Class

Power Trip: 5 fitness apps for staying fit on the road