Airline food is notorious for being awful, but then some are turning up to be Michelin-starred. Which are the best and the worst airline food? We dig into the trash and the posh to find out.

Fun fact: Singapore Airlines is one of the few carriers to create menus in a test kitchen specially built to mimic the food-prep conditions found in an air-pressurized cabin.

The Bad: The porridge that tried

Our guess: It’s fairly simple, a plain porridge with misplaced dim sum. We’re pretty sure this is not what breakfast is supposed to look like in any part of the world. 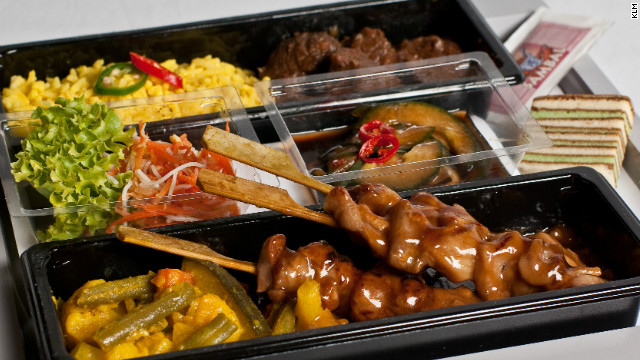 Yakitori on the plane, who woulda thunk.

Fun fact: Evidently you don’t have to sit first class to get this sort of quality; but you do have to pre-order it.

Our guess: Discoloured pineapple rice with a side of chutney and a side piece of pastry that’s been sat on by a fat air stewardess.

The Bad: Sometimes old is not gold

Our guess: Instant curry with 2 lima beans and rockmelon thrown in as an afterthought with a side of shrooms that are currently forming their own ecosystem. And edamame. One thing we know for sure: there’s Crunky biscuits!

The Bad: Inside out food

Our guess: Half of a mini hashbrown – refried, (what looks like) an expired sausage, and an omelette with all of its contents on the outside.

Fun Fact: You need to be at least one hour early to make your pre-order at the kiosk if you want premium fare.

The Bad: The aliens are coming

Our guess: A secret transport vehicle for an brain-eating worm. With a side of crusty bread-like meat, a mouldy fruit cake, a rock bun and a fruit cup.

What were your best and worst airline food experiences, nomads?

Where to Find the Hottest Hookups in the World

This Week in Travel: Get Paid to Cruise