Like you, we miss the heck out of travelling. But we’re not going to let the inability to get our passports stamped dampen our spirits of seeing the world! When desperate times call for desperate measures, we’re going to do all it takes to keep that wanderlust spirit in us alive…even if it means having to ‘travel’ virtually through these movies and TV shows on Netflix.

Warning: There’s going to be a ton more destinations to add to your bucket list once you’re done watching the below.

Watch if: You miss surfing in Bali or skiing down the slopes of Niseko.

If you’re the type of globetrotter that lives for the adrenaline rush of extreme sports or new challenges wherever you go, then this French film is made for you. Follow the film’s athletic daredevils as they bring viewers on a journey through the ski slopes of Chamonix Mont-Blanc, the sculpted mountains of the Pyrenees and the Spanish desert of Almeria.

#2 Down to Earth with Zac Efron

Let’s be honest, we’re all going to watch this for Zac and not for the educational commentary or lack thereof. While reviews about this eight-part web series have been harsh because critics thought it failed to deliver the important awareness messages expected of an environmental travel series, we still think it’s worth watching if you’re free on a weekend and want some light-hearted and fun entertainment. Plus, the show consists of cool cinematography shots that will make your inner travel junkie squeal.

Watch if: You prefer city vacations and enjoy breaking out chic styles during your trips.

Fans of Sex and the City and Devils Wear Prada, this one is for you! Lily Collins plays Emily, a marketing executive from Chicago who lands her dream job in Paris when her company acquires a French luxury marketing company. This new 10-episode series by Netflix is slated to release on October 2nd and we can hardly wait! Is this the closest we’ll ever get to attending Fashion Week in Paris? Maybe. Does the trailer make us wish we were wandering the cobblestone streets of the French capital right now? YES.

Watch if: You love whodunit movies and originally had a trip to Europe planned for this year.

Set in beautiful locations that will make you wish that you were on your private yacht sipping champagne instead of on the sofa in front of the TV, this crime comedy film was ranked no.1 on Netflix’s Most-Watched list last year. Jennifer Aniston and Adam Sandler reunite to play a boring couple who found themselves on an adventure through the Riviera after a chance encounter with a stranger on the plane. While the situation started out all lavish and glamorous for them at first, their trip took an unexpected turn when they became suspected murderers of an ageing billionaire.

Watch if: You’ve just recently experienced a quarantine breakup or if you miss travelling solo.

This coming of age comedy-drama movie tells the story of Rani Mehra, a shy and young Punjabi girl from New Delhi. When her fiancé calls off their wedding, she decides to proceed with their pre-planned honeymoon in Paris and Amsterdam alone. Follow Rani as she tours around both cities, make new friends along the way and discover herself as a strong woman. This movie truly made us reminisce on the times where we got to meet new people from around the world during our travels and create lifelong friendships with those you otherwise wouldn’t have met back home.

Watch if: You want to explore different cultures of the world and be mind-blown at the same time.

Here’s a quick summary: eight strangers from different parts of the world suddenly finds themselves mentally and emotionally linked. They don’t know how or why it’s happening but someone is trying to track them down and they need to work together to make it out alive.

We wouldn’t call this your typical ‘travel’ type of show per se, but this science fiction drama series was literally shot all over the world. According to the show’s producer, Andy Wachowski, the first season was shot in San Francisco, Chicago, Mexico City, Reykjavík, London, Berlin, Nairobi, Seoul and Mumbai.

Watch if: You’re dreaming of a fully-sponsored tropical getaway or if you need a reminder to call your mum/grandma.

Newly-widowed Eva is a retired teacher who finds herself receiving a life insurance check mistakenly made out for US$5,000,000 instead of US$50,000. Eva decides to keep the money and head to the Canary Islands for a trip of a lifetime with her best friend. While they live it up at a luxurious resort, the insurance company back home tries to hunt them down. This movie is quite the pick-me-up given its comedic dialogues and superb acting by Shirley MacLaine and Jessica Lange.

Watch if: You miss wine nights with your girlfriends and wished you could plan another girl’s trip together soon.

Packed with a star-studded cast, this Netflix original movie is about six middle-aged women, who have been friends for decades, travelling to Napa Valley for a celebratory weekend getaway (one of them is turning 50!). Though the main goal of the trip was initially about relaxing and reconnecting with one another, once the alcohol and uncovered truths started flowing, the friends are hit by the fact that they have more to catch up on than they realise. Give this flick a try if you enjoyed watching Bridesmaids!

Sunshine on our minds 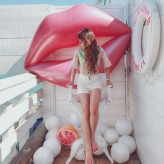