Bali is one of the most beautiful places in the world, rich in so much that your first trip is never your last. Humbly boasting world-class cuisine, culture and traditions that always stay true, bountiful beaches and waterfalls, and perhaps the best of all, is the presence of Hindu and Buddhist religion honoured in old temples still standing today. Make your way around the most popular ones, and don’t forget to dress the part – nothing too bare!

Read also: Everything you shouldn’t do in Bali 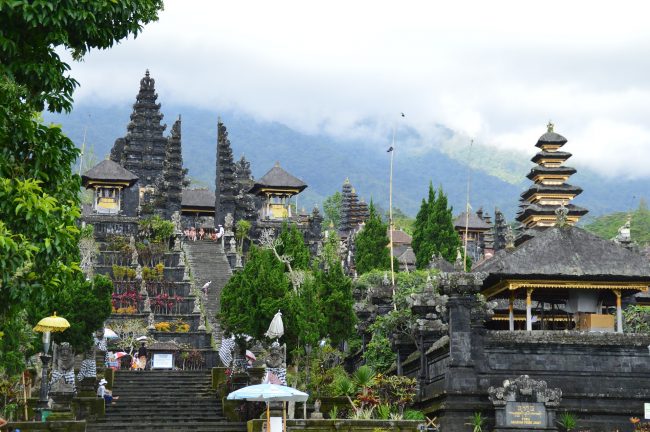 Pura Besakih is Bali’s holiest, largest and most important temple, also called the island’s “Mother Temple”. It’s located around 3,000 feet on the slopes Gunung Agung and contains 23 small temples, some of which were built as far back as the 10th century. Besakih as founded by a Javanese monk named Sri Markandeya. Manuscripts found here show that the site was very important during the Majapahit empire in 1343.

Getting here from Seminyak: A 2-hour drive 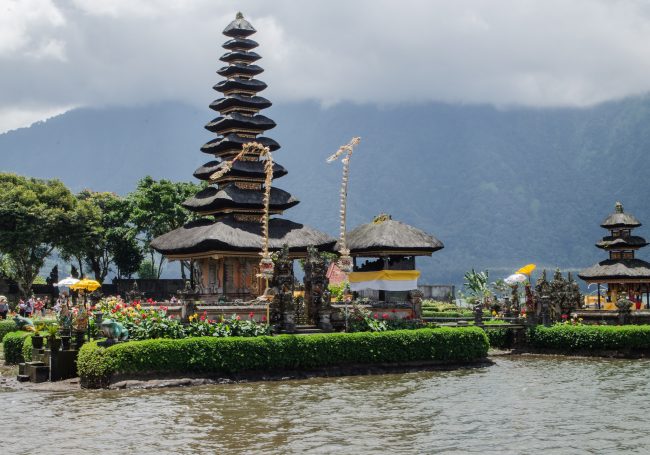 Pura Ulun Danu Bratan is a beautiful temple that sits on the shores of Lake Bratan. It was built in 1663 in adoration of the goddess of lakes and rivers, Dewi Batari Ulun Danu. This is the core water temple in Bali; the Balinese believe that worshipping the goddess grants blessings of richer crops and adequate water.

Getting here from Ubud: A 1.5-hour drive

This one is rather different from the other temples on our list. “Temple” may not even be an accurate way to describe Pura Gunung Kawi. It sits at the bottom of a river valley that runs through the charming town of Tampaksiring. What’s most captivating is the collection of shrines carved into stone.

Getting here from Ubud: A 3-hour drive 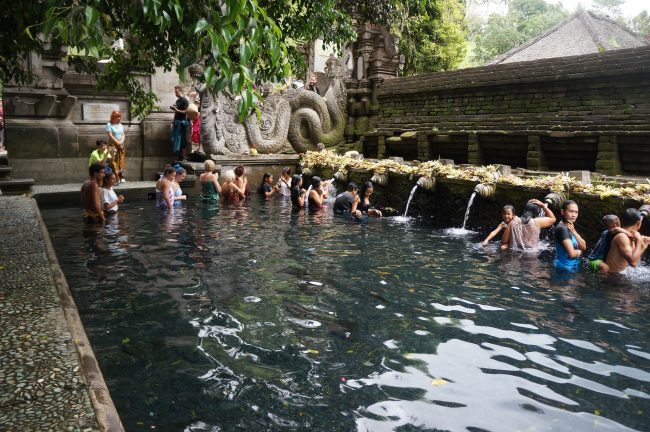 Tirta Empul was built sometime around 926 AD during the Balinese Warmadewa dynasty. The holy waters here are used by priests, who believe that it brings good fortune and health. You can bathe in the waters, but you need to make an offering at the temple before entering the pool.

Getting here from Ubud: An hour’s drive 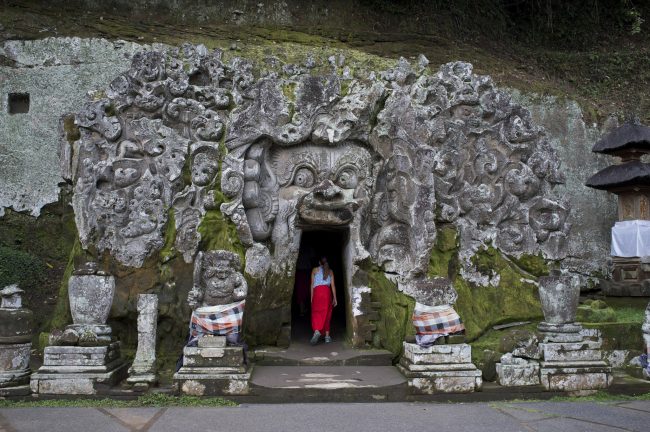 Disclaimer: you won’t find a single elephant here, despite being known as the “Elephant Cave”. Instead, its name comes from the close proximity of Goa Gajah, which was built in the 11th century, to the Elephant River, although you won’t find any elephants there either. Elephants aside, the cave’s carved entrance is something to behold, as is its interior.

Getting here from Ubud: A 15-minute drive 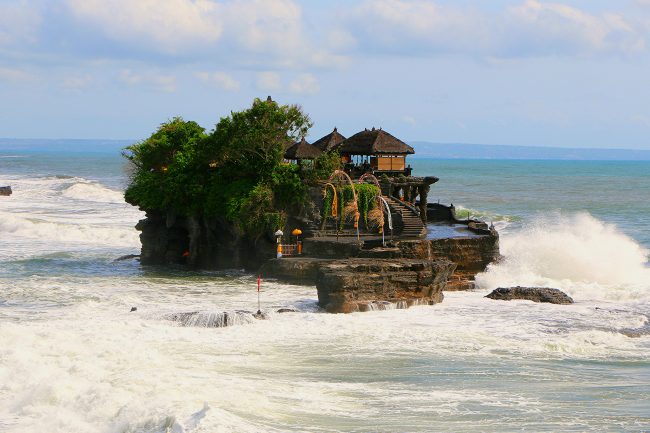 One of the island’s most recognisable temples, Tanah Lot sits on a rock in the sea, accessible to visitors only when the waters are shallow enough to walk through. It was constructed by a priest named Nirartha in the 15th century who spent a night on the rock, and then instructing local fisherman to build a temple there. In the 90s, the temple underwent a multimillion-dollar restoration to keep it from falling into the sea.

Getting here from Ubud: A 30-minute drive

“Taman Ayun” translates to “beautiful garden”, and that it most certainly is. The temple was built in the 1600s by the King of Mengwi and till today is sponsored by the descendants of the Mengwi royal family. It’s known as a kawitan temple, which means it’s dedicated to the ancestors, like the Mengwi ancestors. Also, this temple can be easily ventured to from Pura Tanah Lot and vice versa!

Getting here from Ubud: A 30-minute drive 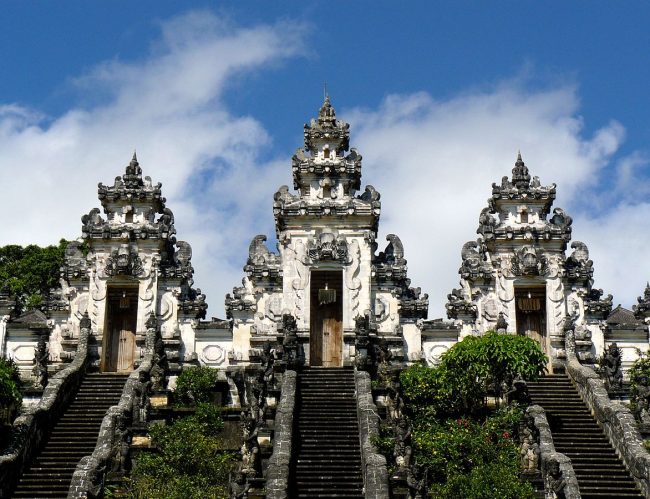 Every bit as majestic as it looks, Pura Luhur Lempuyang is one of the six sad kahyangan, the “temples of the world”, in honour of Sang Hyang Widi Wasa (the supreme God). Not only that, it’s one of the nine protective directional temples that keep evil spirits away. Once you make it up the 1,700 steps you’re promised quite the view!

Getting here from Candidasa: A 50-minute drive 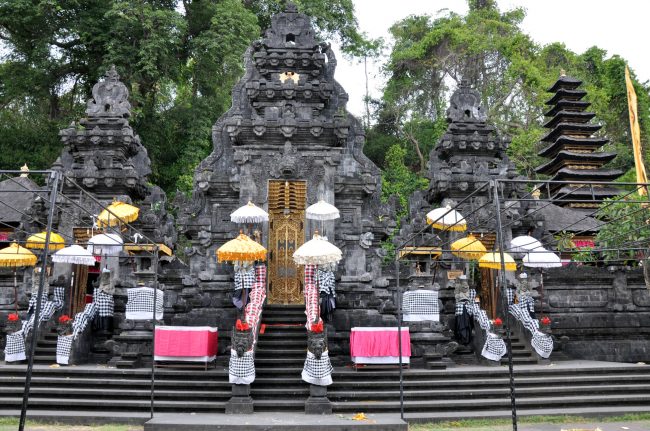 Bats galore! Thousands of bats! Along with the black-sand beach nearby, this is quite the sight, and is popular for post-cremation purification for the rich Balinese. According to legeng, the cave’s interior extends all the way underground to emerge at Pura Besakih.

Getting here from Candidasa: A 30-minute drive

Pura Luhur Uluwatu is also one of the sad kahyangn and a directional temple. It sits on a cliff high above the ocean which gives the temple a sense of drama with crashing waves. This is the perfect place to catch a sunset and the nightly kecak traditional dance performance.

And a luxurious villa to come home to…