I must confess, although I am a bit of a wannabe wellness junkie (i.e. quizzing unfortunate waiters on where they source their food), till recently, I have never attended an actual wellness ‘retreat’. Hence, when well-known HK entrepreneur and environmental activist, Sean Lee-Davies reached out about hosting his 3rd Awethentic Day Retreat at our managed villa Baan Jakawan in Samui; I reverted with a resounding yes. After all, with the theme being #TransformativeTravel, I was looking forward to meeting a new shinier/ fitter/better version of me!

The retreat was invite-only, with an eclectic list of ‘changemaker’ attendees. The guest list was, like the rest of the trip, personally crafted by Sean. Between the 20 guests, there were backgrounds in music, wellness, hospitality, fashion, investment and finance. Plus of course an influencer (cue: Antonia Dacruz who influenced everyone to stay up late!).

With daily sessions of meditation and yoga, from the likes of Rosemary V, Natalie Soderstrom and Bryan Gates (an ex-Tesla engineer turned meditation teacher who flew in all the way from San Francisco); we started and ended each day with fitness for the body and mind.

I was particularly inspired by Rosemary V, who as one of HK’s celebrity models embarked on a major life change moving from fashion to becoming a wellness and yoga advocate. Rosemary shared that when she was pregnant, she meditated every day, and I swear her adorable son Hendrix is the happiest baby I have ever met!

True transformation, however, requires some education and sharing. Hence half of the attendees gave a talk. These included the benefits of veganism and the opportunities in the industry (Shelley Lee-Davis, award-winning director of PLANeat), and the importance of meditation (Bryan Gates, founder of Breathing Room) to the art of creativity in entrepreneurship (Jason Swamy, Creative Director of Wonderfruit). Sean himself also gave a talk on conscious capitalism… and the sixth mass extinction (keeping it real!).

Of course, a retreat doesn’t mean one needs to retreat from having FUN. Sean surprised everyone with a day at sea on a 99ft long Turkish boat, where we dived off (except for me, I jumped with flailing arms ha), paddle boarded and had an amazing session of sunset meditation with Bryan.

Overall am I a different person? Well, I don’t think one attends a retreat for a complete overhaul – but rather to improve parts of yourself. Weeks later, I have made more of a commitment to eat well and make time to workout. And most of all to not feel the need to tick off the endless to-do list (anyone who’s an entrepreneur knows that there’s always something else to get done before calling it a night).

But most of all, meeting such interesting people from various backgrounds has left me with some new friends I know I’ll keep in touch with.

After all, you are the sum of the company you keep 🙂

Interested to hold your own retreat at Baan Jakawan or similar villas? Drop us a line via [email protected]

And if you want to join the next Awethentic Retreat, simply email [email protected] for more info.

Thank you to Ali Ghorbani of Ali G Studios, and member of the Awethentic Retreat photography team, for providing many of these images. 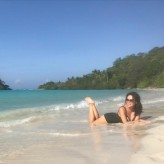 Top Cycling Trails in Bali: Routes for every fitness level