Coastal cities in Europe are making moves to ban cruise ships from docking at its ports. In an effort to make more environmentally positive decisions, David Lisnard, the mayor of Cannes tweeted that coastal municipalities should have more power to fight against marine pollution with new guidelines to ban high-polluting ships from approaching the port or unloading any passengers.

Saint-Raphaël, another French port city located between Cannes and St-Tropez, is also enforcing a similar ruling.

Design studio PriestmanGoode has developed partially edible, plastic-free in-flight meal trays to reduce airline waste. Made from coffee grounds, as well as side-dish lids of algae or banana leaf, edible pods from soluble seaweed, and even a coconut wood spork, the trays are part of a new exhibition at the London Design Museum, titled “Get Onboard: Reduce. Reuse. Rethink.” that is running until February next year.

#3 One more funny from the cabin

Part of the fun (or bane) of travel, are the strange and wacky people you encounter along the way. We’ve seen it all from flying with a therapy pony to Naomi Campbell’s OCD flight habits, and this woman’s mid-air hobby: cross-stitching. Only, it’s not her technique that’s interesting, but the hilarious message she’s crafting on her hoop and linen!

We wonder who she’s making it for.

#4 Keep off this sacred land

Visitors will no longer be able to climb Uluru, the giant monolith rock in Australia from 26 October onwards. Sacred to the land’s traditional owners, the Anangu people, Uluru stands at 328 meters high, and is taller than the Eiffel Tower and London’s Shard. Anyone who ignores the signs and wanders into a restricted area face fines of AU$630 (US$430) and possible prosecution.

The decision was made out of respect to the Anangu people, and the area will be zoned off as a no-access area. 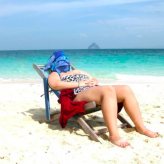 How to get there: Hakuba, where the terrain is varied and Bluebird Days are plentiful

How to get there: Niseko, where powder and apres-ski reigns supreme